Steven Schnoor (PhD – Communication & Culture, York University) is Senior Research Associate with CICADA. He held a 2015-2018 postdoctoral fellowship with INSTEAD and CICADA. His research focuses upon how discourses of democracy and development have been strategically reconfigured so as to advance projects that are widely experienced as anti-democratic, destructive and exploitative, and how this represents a critical component of a nascent strategy by which neoliberal regimes of capital accumulation are advanced and legitimized today. Since 2005, he has been examining how Canadian mining projects are advanced in the Global South, paying particular attention to the politics of engagement with local communities residing near Canadian mines in Central America. 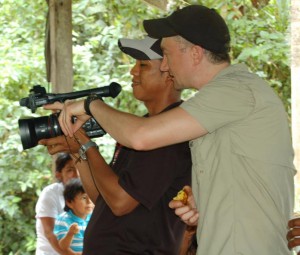 His research also involves examining how carefully configured discourses of indigeneity and what it means to be indigenous are being strategically deployed in efforts at winning “social license” for extractive projects that are simultaneously often resisted on the basis of indigenous cosmologies and epistemologies. His work probes the political implications of the efforts at reconfiguring these dominant discourses along lines that privilege exploitation and accumulation, and jettison in the process notions of trans-species “community of life,” collectivity, solidarity, reciprocity and sustainable coexistence. As hegemonic discourses inform ways of being in the world, his research examines struggles over how such ontologies are signified—how they are represented, and the social and political consequences that result. Some of this work is detailed in this 2017 publication.1

He also works with participatory video and leads video-making workshops with INSTEAD and CICADA partner organizations. He has worked with INSTEAD-affiliated Ngäbé and Buglé groups in Panama, a Maya organization in Guatemala and a Mapuche organization in Argentina, leading participatory video-making workshops that offer training on everything from camera operation and editing to video sharing. In November 2018, he led community video workshops in South Africa with representatives of the San Youth Network from Botswana, and from Kenya, representatives of Maasai and Chepkitale Ogiek community organizations. This work is grounded in the conviction that video technology allows host communities to not only bear witness to events as they unfold over the course of their particular struggles with state and private sector forces, but the process of participatory video-making is also a means by which communities can collectively work through, articulate and defend their visions for alternative life projects to the dominant model of industrial extraction that they are increasingly confronting. This is elaborated upon in this 2019 publication (in French) about participatory video work conducted in Panama.2