Walpole Island First Nation and the Grand Traverse Band of Ottawa and Chippewa are two Anishinaabe First Nations affiliated with CICADA. Both nations are active members in the Indigenous Confluence: the Role of Indigenous Knowledge in River Restoration and Sustainable Futures project.

Walpole Island First Nation is a Council of Three Fires Nation, with Ojibwe, Odawa, and Potawatomi members. This First Nation is located in southern Ontario, northeast of the United States border, in a territory they call Bkejwanong (“where the waters divide”). Walpole Island has a rich and diverse landscape, with tall grass prairies, oak savannas, Carolinian forests, and wetlands, as well as a huge diversity of species. The community is situated at the heart of the Great Lakes, nestled between Lakes Huron and Eerie, at the mouth of Lake St. Clair.

“It’s who we are. We are the river. The river is us. The river is in our veins. And if we explore this, we can come to a realization that […] if we don’t take care of these things that were given to us to sustain in life, our teachings suggest that it can be taken away. And we as people in our community […] know that if our Mother becomes sick, then we will become sick. If the rivers are the lifeblood of our Mother and they become contaminated, then the same happens to us.”

In order to uphold their responsibility as caregivers of the territory, Walpole Island First Nation has been very active in the remediation and restoration of the St. Clair River. Throughout the years, they have sat on the Binational Public Advisory Council with the governments of Canada and the United States, environmental groups, and other stakeholders in a collaborative effort to find a balance between the wants and needs of humans and those of the river. One challenge that the Walpole Island First Nation has confronted in their river restoration efforts is that there tends to be merely a token inclusion of First Nations in these discussions. Although Walpole Island First Nation is attempting to engage in this Western ideology and bureaucracy, Aimee mentioned that these institutions are not truly reflective of their connection with the river. Thus, while the Nation has made a lot of headway in their river stewardship projects, they still do not feel that it is enough.

At the 2015 CICADA conference, Aimee noted that she and her community members have found their involvement with the Indigenous Confluence project helpful and empowering. By learning how indigenous peoples elsewhere in the world are bringing their own ways of being into a context of river stewardship and restoration wherein they must engage with Western traditions, the Nation is discovering new ways of informing their practice by their own worldviews. For instance, Aimee explained that Walpole Island First Nation has been inspired by the Maori Waikato-Tainui tribe to attempt to gain recognition of their river’s personhood: “We want to lead this because it’s our responsibility as Anishinaabe people to look after the land because it looks after us.” 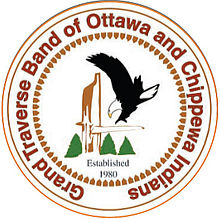 The Grand Traverse Band of Ottawa and Chippewa Indians, an Anishinaabe Three Fires Confederacy people, is located in the lower northern area of Michigan, surrounded by the Great Lakes. In 2007, the Grand Traverse Band began discussions with the state government about a hunting and fishing treaty rights case. These negotiations were based on stipulations that had been established in the Grand Traverse Band’s Treaty of 1836. The Nation was arguing that they could manage and regulate hunting and fishing activities themselves, along with four other tribes, and did not require government interference.

A few years after settling the treaty negotiations, the Grand Traverse Band received federal funding to conduct restoration work on the Boardman River, an important river on their territory. In earlier years, during the treaty negotiations, the Nation thought that it did not necessarily make sense to be at odds with the government and other groups of people about harvesting rights and regulations. They felt that there were many difficulties associated with explaining to non-indigenous people the true meaning of taking care of resources and acting as stewards of the land, as opposed to simply treating the land as quantifiable matter. As such, when the Tribe received this funding, they applied some of it to teaching non-indigenous people about the importance of river restoration to the Grand Traverse Band of Ottawa and Chippewa Indians.

Part of their restoration project has been removing dams from the Boardman River. So far they have removed one dam, called the Brown Bridge Dam. There are four dams in total, three of which they plan on removing. Brett Fessel, a river ecologist employed by the Nation, noted at the 2015 CICADA conference that one of the most beneficial aspects of their river restoration endeavours has been to make non-indigenous people and different levels of government aware of the importance of the river to the Grand Traverse Band of Ottawa and Chippewa Indians: “It means a lot more than just opening it up to canoers or restoring the fisheries within it…What it means to the tribe is something that runs way deeper than any statistical analysis that we can offer to the funders, to the regulators, and so on. And so being involved in this project is really– it’s kind of an adventure…it’s a discovery, it’s a way to start that discussion, that conversation, and really, in my opinion, help these non-tribal regulators and decision-makers…really understand what it means to protect and preserve and conserve for future generations.”

HEAR MORE FROM BOTH NATIONS:

Indigenous Confluence: the Role of Indigenous Knowledge in River Restoration and Sustainable Futures